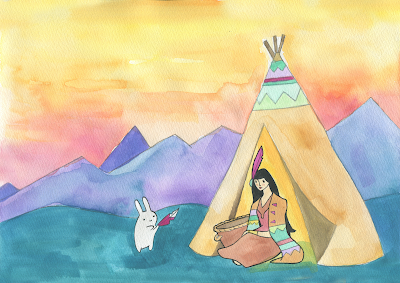 I got hired recently to do some watercolors for someones art website that they are going to be making. I did two. This one was the more open to what I wanted to create, color scheme and subject wise. One of my favorite story books from childhood was "The Legend of the Bluebonnets". A beautiful story about a native american girls sacrifice to help her tribe in a time of sadness and lack of rain. I think I was inspired by that story with this little image. I also wanted to paint a sunset. I know that this isn't the sort of stuff I normally do, but it was fun to do something for someone that was actually narrative based in a way and not just a figure on a page.

In other news I've seen Harry Potter and the Deathly Hallows part 2, 3 times now and have cried each time. Already contemplating a new hp tattoo to go with the two I now have. Really want to get the deathly hallows symbol on my wrist. Or another of my favorite snape quotes. I'm being Bellatrix Lestrange for halloween as well, a costume that I have wanted to do for the last two years but never had the right stuff to pull it off to my satisfaction. My mom as been telling me since Bellatrix showed up on screen "You remind me of the crazy witch". Can't wait for halloween!!
Posted by bunnydee at 12:25 PM