just because angry bunny is always good for a smile. 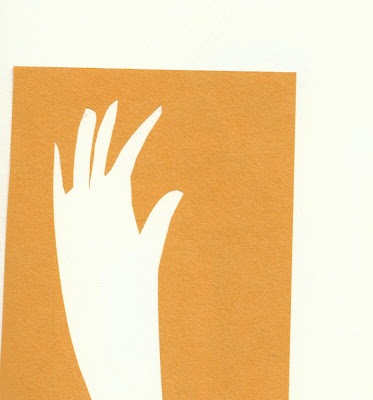 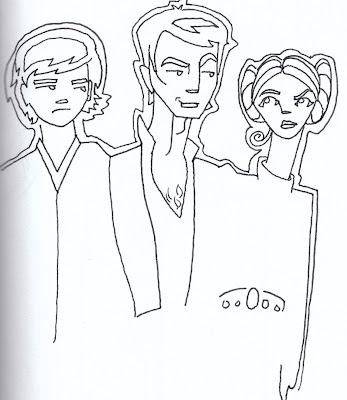 this is probably at least a year and a half old drawing. I still like it though. I currently want to draw spock which is leading to a battle with my star wars fan side.
random fact: at 15 I went to a star wars convention here in san francisco. I went dressed as Princess Leia in A New Hope. I won first place in the junior division of the costume contest.


I also like making paper hand cut outs. Anyway. I'm going to try entering 3 things into the spring show for 09' academy of art. Heres hopin I get in. Ill post the 3 I'm going to be submitting soon here.
Posted by bunnydee at 10:12 PM 1 comment: 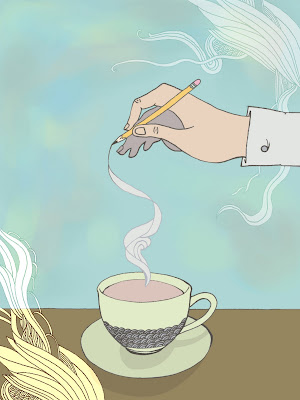 
done with homework.
Posted by bunnydee at 9:37 PM 3 comments: 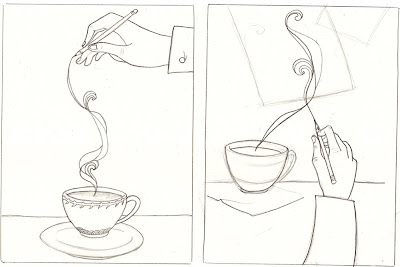 This is for class tomorrow. The assignment was to illustrate a chapter page for Ernest Hemingway's book "A Movable Feast". Now I am not a Hemingway fan, sadly reading "In Love and War" and "Farewell To Arms" In high school never gave me a liking for the author. Mostly because he has no perception of the female spirit. He has a way of shrinking women down to nothing. Women to Hemingway are a note on a page, a pretty face but nothing of substance. The only woman with any strength is his writing on Gertrude Stein in "Moveable Feast". But anyway enough of my dis-like. Don't hold it against me I just much prefer to read F. Scott Fitzgerald or Aldous Huxley. I did have to come up with a drawing for his writing though, which is rather difficult considering what a "wordgasm" it is. I was drawn to the passage about him ordering a drink at the cafe in Paris and taking out his notebook and pencil and starting to write. I wanted it to be sorta surreal and this is what came out of all that......

that was long-winded.
Posted by bunnydee at 10:58 PM No comments: 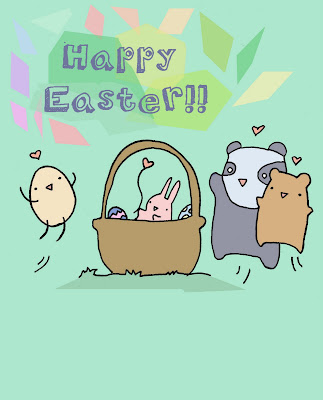 I thought I would post the card that I sent to my parents and brother for Easter. Its a simple little drawing that I did last night and colored. I post it also to introduce the fact that most people that are close with me are given a creature to be in the world of bunny dee. Most of my close friends have been given animal alias's. It sounds funny but people seem to like having characters of themselves. I simply ask "whats your favorite animal?" but some people get assigned an animal or character, which is the case with my family. I originally started doing this a couple years ago when I decided to do some mini children's books for fun for my parents and brother for Christmas. This was pretty easy for my brother and mom. My brother has always been referred to as Boo Boo Bear. Ever since he was little we started calling that. So he obviously became a little brown bear, sometimes referred to as Boo Boo Bear Toast. Since hes shaped like toast. My mom once when I was hanging out with her at her hotel when her and dad came to visit here in SF she had wrapped herself up in her blanket so I said "Mom you look like a baked potato!" to which ever since I started calling her Tay-Toe. She now signs all her cards to me as thus. I love it. My dad was a little harder to come up with but he has a stuffed panda at home. So he became Papa Panda.

So each of my family members are part of a children's book world. I'd love to make a book someday that has each of the characters featured. Wow this was the longest post ever, I guess I felt the urge to explain the lineage of why my family is drawn as certain characters. I myself have always been given stuffed bunnies since I was born and hence the nick name Bunny Dee was born. I'm their own personal easter bunny. LOL. 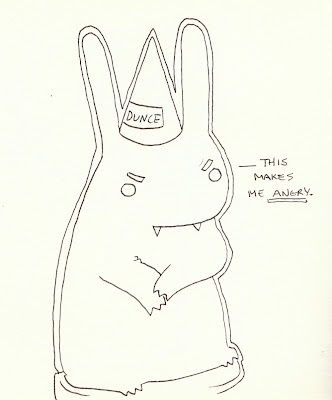 don't make angry bunny feel dumb....it makes him angry. Angry bunny is Bunny Dee's older brother. Hes also my angry side. He made his very first appearance in my icon drawing on the side where he is smashing the monopoly board. Bunny dee has other siblings too. If you notice in the drawing of Bunny Dee with the frying pan, her littlest sister Dido makes her first appearance. Dido is curious. They also have a baby brother named Dylan. Maybe angry bunny needs a name...like....Damien? hahahahah! I like just calling him Angry Bunny. It fits.

night night
Posted by bunnydee at 2:08 AM 3 comments: 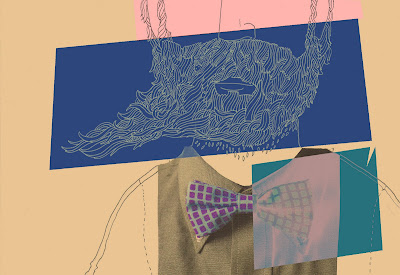 drew this while listening to the animal collective. I guess this is what happens when inspirational music hits my system. More packing in my future. Brothers graduation from Loyolla Marymount is coming up soon. Need to get my plane tickets. 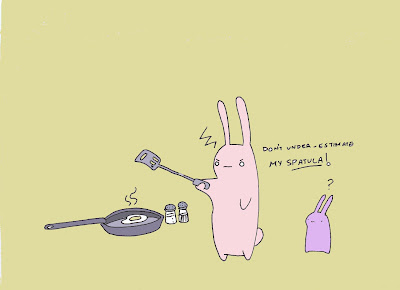 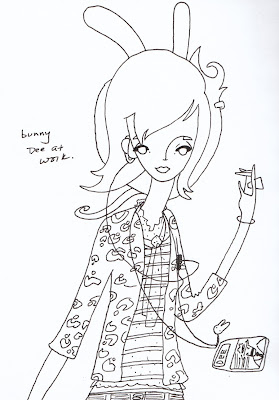 I'm really not feeling well. It must be allergies. The drastic weather changes that have been having wreak havoc on my body. I'm post this because I don't work at borders anymore but this was a drawing I did while I was working there. Worked there a year and 9 months, thats a long ass time. Hoping for bigger and better things once I move. 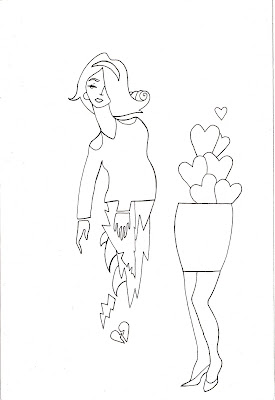 geeze where have I been. I was at home for nearly 4 days. But heres some art..bleh I didn't post the colored version because some of my teachers don't get my color palate..Barron Storey gets it...I'm super confused by the teaching circuit as of late.
Posted by bunnydee at 10:15 AM No comments: