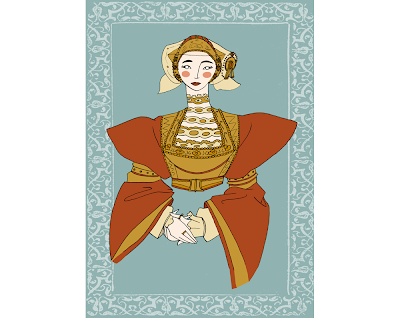 I've been on a kick of drawing period costumes lately. It has always been a favorite thing of mine. When I was a kid I loved drawing elizabethan ruffs on all my drawings. Or giving animals ball gowns..I was fascinated with history from a very young age. At times instead of watching cartoons I would beg my parents to put on the national geographic tape we had about the titanic and its sinking. Oh Lady Anne of Cleves. She was rather lucky wasn't she to escape the ax. I've always loved the depiction of her from her portrait that was sent to Henry to see if he would wish to marry her. I really want to do more period costume drawings. They really are my favorite to do. I often wish I could dress like they did back in those days..just for a day. 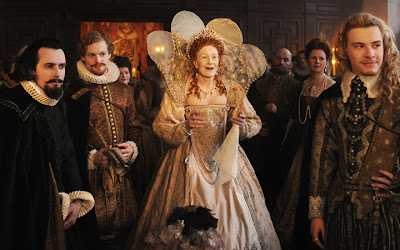 I also finally got to see Anonymous. Well..I've seen it twice as of today. When the movie Elizabeth came out, I saw that 3 times in theaters. Period costumes make me drool. As does the actor in the black off to the left side. He plays the hunchback Robert Cecil. I usually like the bad guys. I didn't mind his back either, hes a great character and the actor gave life to a person so often reviled in history. He did a brilliant job at the roll. Many of the actors were amazing. David Thewis, Vanessa Redgrave, Rafe Spall..it was beautifully shot, had a wonderful soundtrack and a dramatic plot.
I am going home next week. So excited!
Hope everyone has a good weekend!
Posted by bunnydee at 6:46 PM 1 comment: